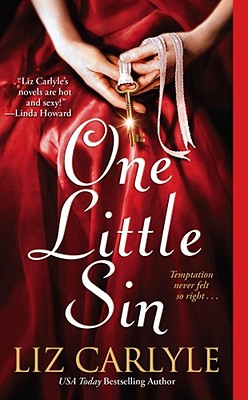 National bestselling author Liz Carlyle presents her most tempting romance to date -- a sinfully sensual tug-of-war between heavenly desires and earthly delights....
He was a scoundrel, a scamp, and a hopeless skirt-chaser. So it shouldn't have been so surprising when Sir Alasdair awoke after a night of debauchery to see a young lass on his doorstep...with a baby in her arms.
She was beautiful, brazen, and utterly bankrupt. So it shouldn't have been so shocking when Miss Hamilton accepted the rogue's scandalous proposal to move in with him...and become the baby's governess.
One little sin brought them together. But when one man's wicked charms are matched by one woman's fiery spirit, one little sin can lead to another...and another...and another....

Praise For One Little Sin…

During her frequent travels through England, Liz Carlyle always packs her pearls, her dancing slippers, and her whalebone corset, confident in the belief that eventually she will receive an invitation to a ball or a rout. Alas, none has been forthcoming. While waiting, however, she has managed to learn where all the damp, dark alleys and low public houses can be found. Liz hopes she has brought just a little of the nineteenth century alive for the reader in her popular novels, which include the trilogy of One Little Sin, Two Little Lies, and Three Little Secrets, as well as The Devil You Know, A Deal With the Devil, and The Devil to Pay. Please visit her at LizCarlyle.com, especially if you're giving a ball.
Loading...
or
Not Currently Available for Direct Purchase