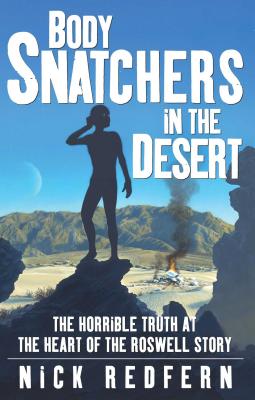 Body Snatchers in the Desert

The Horrible Truth at the Heart of the Roswell Story

IT WAS A CONSPIRACY TO HIDE A SECRET EXPERIMENT

"RAAF captures flying saucer on ranch in Roswell region." Ever since this provocative headline appeared on July 8, 1947, conspiracy theorists have sincerely believed that the U.S. government has maintained an extensive operation of cover-up-and-denial regarding its knowledge of alien life. But there was, in fact, no UFO crash with dead alien bodies. What really happened on that fateful day is much more sinister. The persistent rumors surrounding the UFO crash in Roswell, New Mexico, are part of a bigger conspiracy -- one orchestrated and fostered by the government itself as a smokescreen to bury a truth that is much darker, and disturbingly, far more believable.
Now, through never-before-revealed testimony from military whistleblowers, eyewitness intelligence reports, and an astonishing body of corroborative evidence, Nick Redfern lays out a shockingly plausible new theory on the Roswell incident: that the crash-site discovery of prototype military aircraft would expose a damning secret -- a highly confidential, U.S. government-sanctioned program to conduct medical experiments on deformed, handicapped, disfigured, and diseased Japanese POWs, exploited as "expendable" victims by their captors.
An important account that forces us to take a closer look at both the Roswell story and post-war American history, BODY SNATCHERS IN THE DESERT casts a startling, new light on a shocking conspiracy more than half a century in the making.

Nick Redfern began his writing career in the 1980s on Zero -- a British-based magazine devoted to music, fashion, and the world of entertainment. He has written eight books, including Body Snatchers in the Desert: The Horrible Truth at the Heart of the Roswell Story, and has contributed articles to numerous publications, including the London Daily Express, Eye Spy magazine, and Military Illustrated. He lives in Dallas, Texas.
Loading...
or support indie stores by buying on