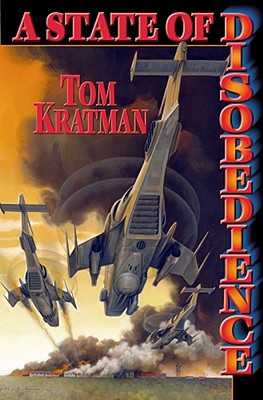 A State of Disobedience

It's Time to Remember the Alamo All Over Again-Here Comes the Second Texan Revolution!

In the long war against terrorism, the US Government had taken on extraordinary powers. And now that the war was won, powerful forces in the government had no intention of relinquishing those powers. As in 1860, the country was on the verge of civil war. And as in 1860, a leader arose to save the country-but it was not the President this time. Instead, the Governor of Texas was the woman of destiny. . . .

In 1974, at age seventeen, Tom Kratman became a political refugee and defector from the PRM (People’s Republic of Massachusetts) by virtue of joining the Regular Army. He stayed a Regular Army infantryman most of his adult life, returning to Massachusetts as an unofficial dissident while attending Boston College after his first hitch. Back in the Army, he managed to do just about everything there was to do at one time or another. After the Gulf War, with the bottom dropping completely out of the anti-communist market, Tom decided to become a lawyer. Every now and again, when the frustrations of legal life and having to deal with other lawyers got to be too much, Tom would rejoin the Army (or a somewhat similar group, say) for fun and frolic in other climes. His family, muttering darkly, put up with this for years. He no longer practices law, instead writing full-time for Baen. His novels for Baen include A State of Disobedience, Caliphate, and the series consisting of A Desert Called Peace, Carnifex, The Lotus Eaters, The Amazon Legion, Come and Take Them, The Rods and the Axe, and A Pillar of Fire by Night. He has written novels with John Ringo: Watch on the Rhine, Yellow Eyes, and The Tuloriad. Also for Baen, he has written the first three volumes of the modern-day military fiction series Countdown.
Loading...
or
Not Currently Available for Direct Purchase