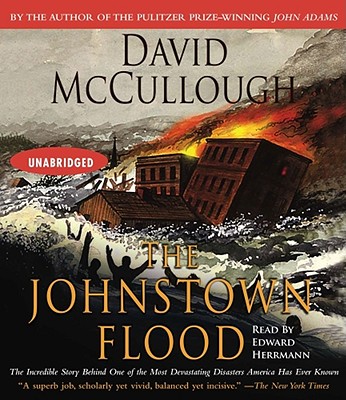 The stunning story of one of America’s great disasters, a preventable tragedy of Gilded Age America, brilliantly told by master historian David McCullough.

At the end of the nineteenth century, Johnstown, Pennsylvania, was a booming coal-and-steel town filled with hardworking families striving for a piece of the nation’s burgeoning industrial prosperity. In the mountains above Johnstown, an old earth dam had been hastily rebuilt to create a lake for an exclusive summer resort patronized by the tycoons of that same industrial prosperity, among them Andrew Carnegie, Henry Clay Frick, and Andrew Mellon. Despite repeated warnings of possible danger, nothing was done about the dam. Then came May 31, 1889, when the dam burst, sending a wall of water thundering down the mountain, smashing through Johnstown, and killing more than 2,000 people. It was a tragedy that became a national scandal.

Graced by David McCullough’s remarkable gift for writing richly textured, sympathetic social history, The Johnstown Flood is an absorbing, classic portrait of life in nineteenth-century America, of overweening confidence, of energy, and of tragedy. It also offers a powerful historical lesson for our century and all times: the danger of assuming that because people are in positions of responsibility they are necessarily behaving responsibly.

Edward Herrmann's films include Nixon, The Purple Rose of Cairo, Annie, and The Aviator. On television's Gilmore Girls he starred as the patriarch, Richard Gilmore. He has also appeared on The Good Wife, Law & Order, 30 Rock, Grey's Anatomy, and Oz. He earned an Emmy Award for The Practice, and remains well-known for his Emmy-nominated portrayals of FDR in Eleanor and Franklin and Eleanor and Franklin: The White House Years. On Broadway, he won a Tony Award for his performance in Mrs. Warren's Profession.

Praise For The Johnstown Flood…

The New Yorker A first rate example of the documentary method....Mr. McCullough is a good writer and painstaking reporter and he has re-created that now almost mythic cataclysm...with the thoroughness the subject demands.


The New York Times We have no better social historian.


Book World McCullough has resurrected the flood for a generation that may know it in name only. He proves the subject is still fresh and spectacular.

John Leonard The New York Times We have no better social historian.