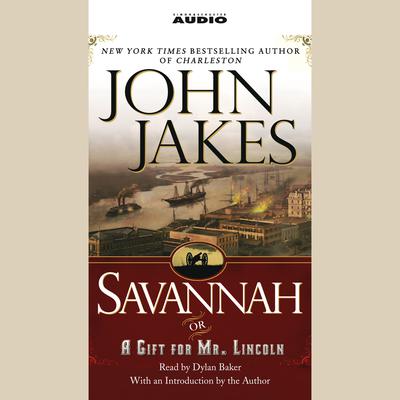 Savannah {or} a Gift for Mr. Lincoln - Abridged (Digital Audiobook)

The author of sixteen consecutive New York Times bestsellers sets his sights on the jewel of the South-Savannah-and brings it to life in his inimitable style.
Georgia, 1864: Sherman's army marches from Atlanta to the sea. In its path, the charming old city of Savannah where the Lester ladies -- attractive widowed Sara and her feisty twelve-year-old daughter Hattie -- struggle to save the family rice plantation. When Sherman offers the conquered city to President Lincoln as "a Christmas gift," Hattie and the feared general find themselves on a collision course that will astonish both of them.
In this rousing new tale, "the godfather of the historical novel" -- (Los Angeles Times) -- tells a story of battlefield danger, wartime romance, and indomitable courage. The rich cast of characters includes a corrupt judge; a fast-talking, piano-playing reporter from New York; a pair of thwarted young lovers; a raffish Indiana cavalryman; a valiant former slave; and a whole bagful of rascals, rebels, and real soldiers who marched with Sherman.
Together they bring to life an almost-forgotten moment in the Civil War -- a season of simmering hostilities, rising hopes, and empty stockings -- perhaps the most strife-torn yet heartwarming Christmas in all of American history.
Loading...