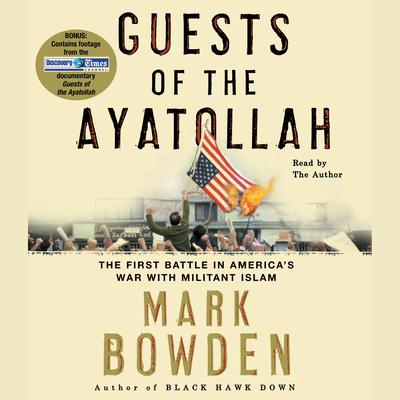 On November 4, 1979, a group of radical Islamist students, inspired by revolutionary Iranian leader Ayatollah Khomeini, stormed the U.S. embassy in Tehran. They took fifty-two Americans hostage and kept nearly all of them captive 444 days.

The Iran hostage crisis was a watershed moment in American history. It was America's first showdown with Islamic fundamentalism, a confrontation at the forefront of American policy to this day. It was also a powerful dramatic story that captivated the American people, launched yellow-ribbon campaigns, made celebrities of the hostage's families, and crippled the reelection campaign of President Jimmy Carter.

Mark Bowden tells this sweeping story through the eyes of the hostages, their radical, naïve captors, the soldiers sent on the impossible mission to free them, and the diplomats working to end the crisis. Taking listeners from the Oval Office to the hostages' cells, Guests of the Ayatollah is a remarkably detailed, brilliantly re-created, and suspenseful account of a crisis that gripped and ultimately changed the world.
Loading...