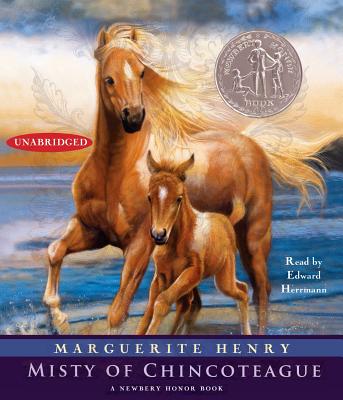 On the island of Chincoteague, off the coasts of Virginia and Maryland, lives a centuries-old band of wild ponies. Among them is the most mysterious of all, Phantom, a rarely-seen mare that eludes all efforts to capture her—that is, until a young boy and girl lay eyes on her and determine that they can’t live without her.

The frenzied roundup that follows on the next Pony Penning Day does indeed bring Phantom into their lives, in a way they never would have suspected. Phantom would forever be a creature of the wild. But her gentle, loyal colt Misty is another story altogether...

Praise For Misty of Chincoteague…

Marguerite Henry was the beloved author of such classic horse stories as King of the Wind; Misty of Chincoteague; and Stormy, Misty’s Foal, all of which are available in Aladdin paperback editions.