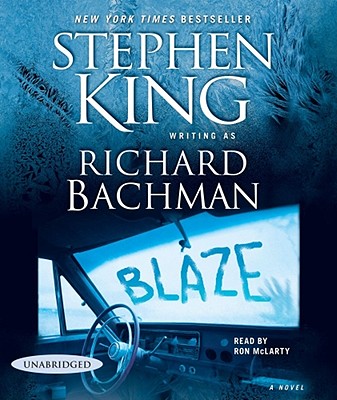 During the years 1966-1973, Stephen King was actually two men. Stephen King wrote (and sold) horror stories to magazines such as Cavalier and Adam, while Richard Bachman wrote a series of novels that would not be published until the early 1980s and were then collected as The Bachman Books. Bachman died of pseudonym cancer in 1985, shortly after another of his novels, Thinner, was attributed to Stephen King; but a sixth Bachman novel, The Regulators, surfaced in 1995 and was published simultaneously with Stephen King's Desperation, to which it bore a weird resemblance. Blaze—both brutal and sensitive—was the last novel written during Bachman's early period. It is his legacy. King's proceeds from Blaze will be donated to The Haven Foundation, which supports freelance artists.

Ron McLarty has appeared on Broadway in That Championship Season, Our Country's Good, and Moonchildren. His film credits include Two Bits, The Postman, and The Flamingo Kid. He has starred on television in Spenser for Hire and Cop Rock. Mr. McLarty is also a novelist and an award-winning playwright.
Loading...
or
Not Currently Available for Direct Purchase