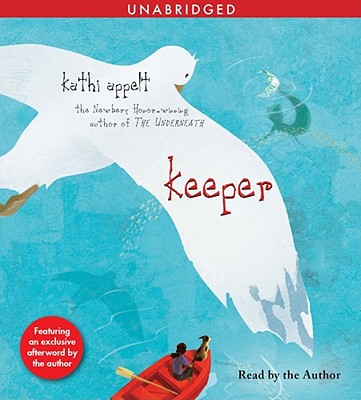 Newbery Medal Honoree Kathi Appelt enchants with a tale about mermaids, mermen, and what happens when you believe in fairy tales for too long.

Keeper was born in the ocean, and she believes she is part mermaid. So when she accidentally sets off a series of disasters, she goes out looking for her mother—an unpredictable and uncommonly gorgeous woman who swam away when Keeper was three. Keeper heads right for the ocean, right for the sandbar where mermaids are known to gather on full moon nights. But her boat is too small for the surf—and much too small for the storm that is brewing on the horizon.
Kathi Appelt follows her award-winning and New York Times bestselling novel The Underneath with this stunning, mysterious, and breathtaking tale of a girl who outgrows fairy tales just a little too late—and learns in the end that there is nothing more magical and mythical than love itself.

Kathi Appelt is the author of the Newbery Honoree, National Book Award finalist, PEN USA Literary Award–winning, and bestselling The Underneath as well as the National Book Award finalist The True Blue Scouts of Sugar Man Swamp, Maybe a Fox (with Alison McGhee), Keeper, and many picture books including Counting Crows and Max Attacks. She has two grown children and lives in College Station, Texas, with her husband. Visit her at KathiAppelt.com.

Kathi Appelt is the author of the Newbery Honoree, National Book Award finalist, PEN USA Literary Award–winning, and bestselling The Underneath as well as the National Book Award finalist The True Blue Scouts of Sugar Man Swamp, Maybe a Fox (with Alison McGhee), Keeper, and many picture books including Counting Crows and Max Attacks. She has two grown children and lives in College Station, Texas, with her husband. Visit her at KathiAppelt.com.