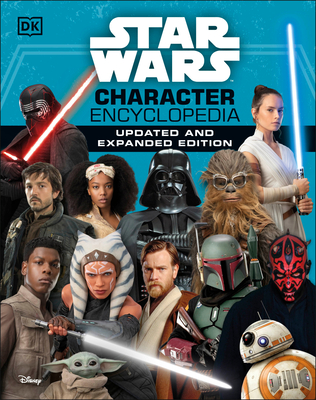 The definitive guide to more than 275 heroes, villains, aliens, and droids of the Star Wars galaxy.

The latest edition of this beloved title has been comprehensively updated to include new characters from Star Wars: The Rise of Skywalker and both seasons of Star Wars: The Mandalorian.

Want to learn more about the Knights of Ren? Curious as to where Padmé Amidala is from? Wonder how tall Grogu is?

To learn the answers to these questions and more, look no further than Star Wars: Character Encyclopedia Updated and Expanded Edition. Written by Star Wars experts, the book is full of fun facts and intriguing information that’s guaranteed to enthrall fans of all ages.

With plenty of lesser-known details, even die-hard fans will learn new facts about iconic characters.

Dan Zehr is a Star Wars expert and is the host and brand director of the podcast Coffee With Kenobi. He co-wrote The Star Wars Book alongside Pablo Hidalgo and Cole Horton, is a feature blog contributor for StarWars.com, and is a prominent influencer in Star Wars fandom. Dan is also a prolific high school educator, who teaches Literature and Composition, and has a Master’s Degree in Teaching and Learning. He resides in Illinois with his wife and three boys.

Amy Richau writes about pop culture and film history. She's the author of Star Wars I Love You. I Know.: Lessons in Love and Friendship and her work has appeared in StarWars.com, StarTrek.com, Star Wars Insider magazine, and Nerdist. She was a researcher and appeared in the docu-series Looking for Leia and worked for many years as a film preservationist. Amy lives outside Boulder, Colorado, with her husband, two children, and several pets.

Elizabeth Dowsett is a London-based writer and editor who specialises in Star Wars and sharing the secrets from the library of holocrons. She has been writing and editing illustrated books for 14 years and has worked on more than 35 Star Wars titles as well as many other popular licences for both adults and children.

Pablo Hidalgo has been writing professionally about Star Wars since 1995. In 2000, he joined Lucasfilm to become a full-time Star Wars authority, first as a StarWars.com writer, and now as a creative executive in story development. He has written or co-written several authoritative Star Wars reference books, including DK's best-selling Star Wars: The Force Awakens The Visual Dictionary, Star Wars: Rogue One The Ultimate Visual Guide, and Star Wars: The Last Jedi Visual Dictionary. He lives in San Francisco.

Simon Beecroft is the New York Times bestselling author of LEGO Star Wars: The Visual Dictionary as well as many other Star Wars titles for children, including Star Wars The Clone Wars: Watch Out For Jabba the Hutt, Star Wars: Luke Skywalker's Amazing Story Star Wars: Beware the Dark Side. He has also written books on subjects as diverse as dinosaurs, extreme weather, future technology, Nelson Mandela, Power Rangers, and the Fantastic Four.
Loading...
or support indie stores by buying on