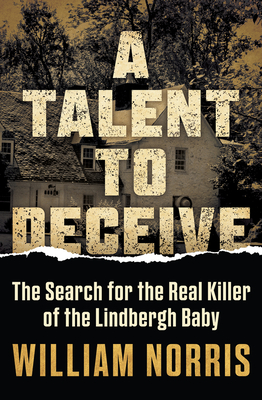 A Talent to Deceive

The Search for the Real Killer of the Lindbergh Baby

No one is innocent when a mystery is unsolved.

Charles Lindbergh was known for many things during his lifetime. He was a famous aviator, the first person to fly nonstop across the Atlantic Ocean, winner of the Orteig Prize, and a young American hero. But despite his honors and achievements, his name will forever be associated with the infamy of one of the Trials of the Century. The Lindbergh Kidnapping.

On a dreary March night, Charles Lindbergh’s 20-month-old son was abducted from his crib. The baby’s kidnapper left behind muddy footprints, a broken ladder, and a ransom note demanding $50,000. Weeks later, Charles Lindbergh Jr. was found … dead. Everyone was a suspect in this investigation, even the Lindberghs. After a six-week trial, Bruno Richard Hauptmann was named the ultimate culprit, but he claimed he was innocent even up to his execution day.

For nearly 100 years, the Lindbergh Kidnapping still remains a major topic of controversy and fascination. A Talent to Deceive uses investigative journalism to dive into evidence ignored by previous investigators in search of the truth. Who really committed the crime? What really happened the night of March 1, 1932? What was the motive to kidnap and murder the Lindbergh baby?

Follow Norris in this history-meets-mystery tale as he performs a thorough investigation to solve The Case That Will Never Die.