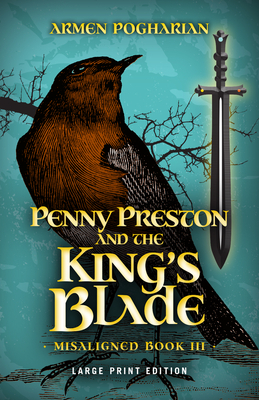 Penny Preston and the King's Blade

Eight-grader Penny Preston thought she knew how to handle the Bodach, the spirits from the 5th dimension. But suddenly something is attacking the structure of the multiverse. Left unchecked, the attack will tear the fabric separating the dimensions and destroy the universe in a cataclysmic cosmic crunch. As the stress on the fabric grows, higher-dimensional energy escapes into Piper Falls, NY, re-energizing the Bodach. Emboldened, they use their regained powers to wreak havoc on the small town.

The extra energy draws several new higher-dimensional entities to Piper Falls. One of them, a former Bodach commander, seeks to rally her followers and avenge her defeat at the hands of King Arthur more than 1,600 years ago by re-establishing her rule. The energy also attracts an especially destructive ethereal Celtic spirit, which has a special taste for ancient artifacts and exotic nuclear particles. The last of the new arrivals is a mysterious and conflicted shape-shifter⎯ a spy known as Newiddyn.

The interactions of the newcomers and their empowered brethren with the town's residents results in chaos and brings paranormal researcher Darin Kolchak back to town. Teamed with the Deputy Sheriff, their high technology investigation leads them to the local lab conducting state of the art nuclear fusion experiments. The same lab where Penny's parents work.

Penny and her friends must again dodge detection, as they sort out the capabilities and intentions of these powerful entities. One bad choice or wrong step risks unleashing the apocalypse of the Darkest Day.