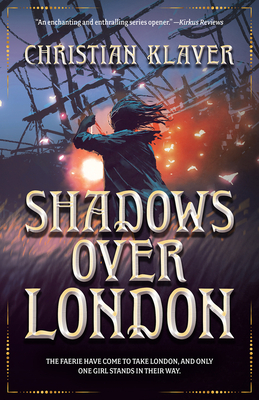 Shadows Over London (Empire of the House of Thorns #1)

The Faerie have come to take London, and only one girl stands in their way.

Justice isn’t your average fifteen-year-old girl. She’s an irrepressible scoundrel, and she always has a plan. But her world falls apart when her father forcibly bundles the entire family into carriages in the middle of the night and carts them off to a strange mansion on the outskirts of Victorian London. The Faerie are invading, but the Kasric siblings can’t stay neutral in the ensuing war when they find their parents on opposing sides. Justice has no choice but to embrace her burgeoning magical powers to fight against the Faerie and save her family.

“Fantasy at its most fantastic. Monsters, mystery, and magic in a beautiful and frightening world all their own. Justice Kasric and her strange family are a delight from first to last.”  —Steven Harper, author of The Books of Blood and Iron series

Christian Klaver has been writing for over twenty years, with a number of magazine publications, including Escape Pod, Dark Wisdom Anthology, and Anti-Matter. He’s the author of The Supernatural Case Files of Sherlock Holmes series, but has written over a dozen novels, both fantasy and sci-fi, often with a Noir bent. He's worked as book-seller, bartender and a martial-arts instructor before settling into a career in internet security. He lives just outside the sprawling decay of Detroit, Michigan, with his wife, Kimberly, his daughter, Kathryn, and a group of animals he refers to as The Menagerie. He’s also a part of the Untitled Writer’s Group based in Ann Arbor for the past decade or so with a bunch of equally starry-eyed dreamers and social misanthropes.