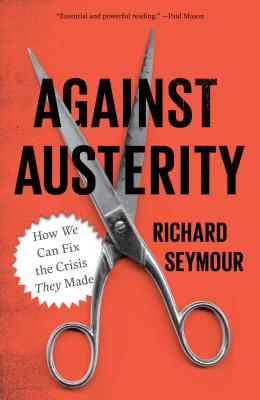 How we Can Fix the Crisis they Made

Five years into capitalism's deepest crisis, which has led to cuts and economic pain across the world, Against Austerity addresses a puzzling aspect of the current conjuncture: why are the rich still getting away with it? Why is protest so ephemeral? Why does the left appear to be marginal to political life?

In an analysis which challenges our understanding of capitalism, class and ideology, Richard Seymour shows how ‘austerity’ is just one part of a wider elite plan to radically re-engineer society and everyday life in the interests of profit, consumerism and speculative finance.

But Against Austerity is not a gospel of despair. Seymour argues that once we turn to face the headwinds of this new reality, dispensing with reassuring dogmas, we can forge new collective resistance and alternatives to the current system. Following Brecht, Against Austerity argues that the good old things are over, it's time to confront the bad new ones.

Richard Seymour is the author of Unhitched: the Trial of Christopher Hitchens (2012), American Insurgents: A Brief History of American Anti-Imperialism (2012), The Meaning of David Cameron (2010) and The Liberal Defence of Murder (2008). His writes regularly for the Guardian and runs the popular blog Lenin's Tomb.
Loading...
or support indie stores by buying on