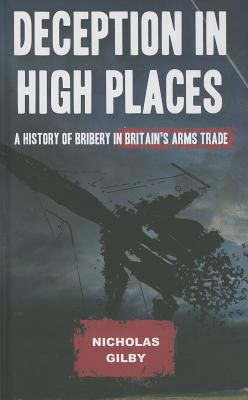 A History of Bribery in Britain's Arms Trade

Based on painstaking research in government archives, collections of private and court papers and documents won by the author in a landmark Freedom of Information Tribunal against the Foreign and Commonwealth Office, the book illuminates a shadow world of bribery and elite enrichment.

Deception in High Places charts British government involvement in arms trade corruption and presents the fullest history yet of bribery in Britain’s arms deals with Saudi Arabia. It includes the backstory of the controversial termination of a Serious Fraud Office corruption investigation following pressure by the Saudi Royal Family and the British establishment.

Praise For Deception in High Places: A History of Bribery in Britain's Arms Trade…

"This book offers a devastating portrait of the UK government's complicity in arms deal corruption over many decades. This superbly researched must-read account allows the facts to speak for themselves. Nicholas Gilby has performed a valuable service for all of those who wish their government to enforce the law, including in relation to international corruption and human rights." - Andrew Feinstein, author of The Shadow World: Inside the Global Arms Trade and founding Director of Corruption Watch UK

Nicholas Gilby led the Campaign Against Arms Trade's efforts to expose corruption in Britain's arms deals with Saudi Arabia. He is the author of The No-Nonsense Guide to the Arms Trade (2009) and his research has featured in the Guardian, BBC's Newsnight and Al Jazeera.
Loading...
or
Not Currently Available for Direct Purchase