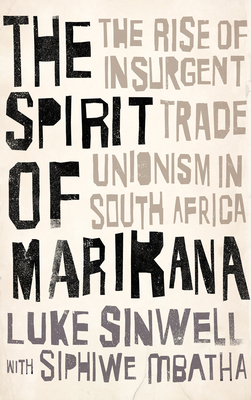 The Spirit of Marikana

The Rise of Insurgent Trade Unionism in South Africa (Wildcat)

On August 16, 2012, thirty-four black South African mineworkers were shot by police working under the auspices of the African National Congress in what has become known as the Marikana massacre. An attempt to stop the rise of independent working-class power, the incident is now seen as a major turning point in the history of South Africa and its politics.

The Spirit of Marikana tells the story of the leaders of labor action at the world’s three largest platinum mining companies, who survived ongoing state-sponsored campaigns of violence, intimidation, torture, and murder to push forward a worker’s rights agenda and begin the hard work of transforming their workplaces and their nation. A close-up ethnographic account, the book brings the seemingly ordinary people behind the movement to life through vivid interviews and oral histories.


Praise For The Spirit of Marikana: The Rise of Insurgent Trade Unionism in South Africa (Wildcat)…

"This book highlights the crucial role of ordinary workers in changing history. It is a richly textured portrayal of the lives and activities of the grassroots worker leaders who organized the historic platinum strikes in South Africa. It is a path-breaking history of the labour movement and a scholarly tribute to the agency of the slain Marikana miners and their comrades."
— Trevor Ngwane, South African anti-apartheid activist

"Presents an ethnographic investigation of the micropolitics of resistance that culminated in the strikes of 2012 and 2014 at Amplats and Lonmin; demonstrates how workers developed a critique of the discourse of their employers and their union, formed a counterdiscourse based on their own lived experiences, and undertook a set of actions in order to transform their reality and the political face of South Africa."
— Journal of Economic Literature