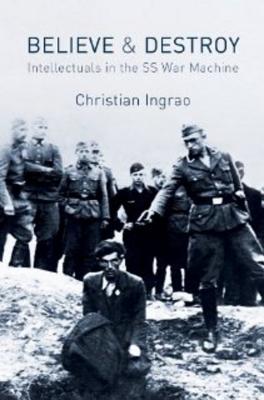 Intellectuals in the SS War Machine

There were eighty of them. They were young, clever and cultivated; they were barely in their thirties when Adolf Hitler came to power. Their university studies in law, economics, linguistics, philosophy and history marked them out for brilliant careers. They chose to join the repressive bodies of the Third Reich, especially the Security Service (SD) and the Nazi Party's elite protection unit, the SS. They theorized and planned the extermination of twenty million individuals of allegedly 'inferior' races. Most of them became members of the paramilitary death squads known as Einsatzgruppen and participated in the slaughter of over a million people.

Based on extensive archival research, Christian Ingrao tells the gripping story of these children of the Great War, focusing on the networks of fellow activists, academics and friends in which they moved, studying the way in which they envisaged war and the 'world of enemies' which, in their view, threatened them. The mechanisms of their political commitment are revealed, and their roles in Nazism and mass murder. Thanks to this pioneering study, we can now understand how these men came to believe what they did, and how these beliefs became so destructive.

The history of Nazism, shows Ingrao, is also a history of beliefs in which a powerful military machine was interwoven with personal experiences, fervour, anguish, utopia and cruelty.