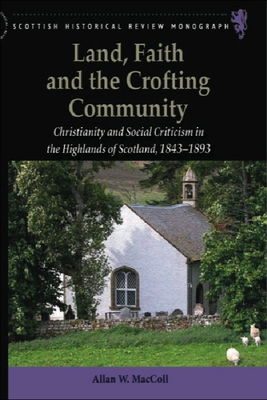 Land, Faith and the Crofting Community

This book probes the deep-rooted links between the land, the people and the religious culture of the Scottish Highlands and Islands in the nineteenth century. The responses of the clergy to the social crisis which enveloped the region have often been characterised as a mixture of callous indifference, cowering deference or fatalistic passivity. Allan MacColl's pioneering research challenges such stereotypical representations of Highland ministers head-on. Land, Faith and the Crofting Community is the first full-scale examination of Christian social teaching in the nineteenth-century Gaidhealtachd and addresses a major gap in the historical understanding of Gaelic society. Seeking to lay bare the existing myths by a wide-ranging analysis of all the denominational, theological and social factors at play, this study boldly overturns the received scholarly and popular interpretations. A ground-breaking work, it explores a substantial but under-utilised field of evidence and questions whether or not Highland Christians - both clergy and laity - were committed to land reform as an engine of social improvement and conciliation. The Christian contribution to the development of a distinctively Highland identity - which found expression during the Crofters' War of the 1880s - is delineated, while wider links between theology and social philosophy are examined from beyond the perspective of the Highlands.

Allan MacColl, a native of Lochaber, was educated at the Universities of Edinburgh and Cambridge and is currently a student for the ministry in the Free Presbyterian Church of Scotland. His research has focused on the interplay of religion and culture in the Gaelic world. Dr MacColl's forthcoming publication Sith na Doire is the long-anticipated edition of the Gaelic poetry of the late Donald MacColl, Acharacle, Argyll.
Loading...
or
Not Currently Available for Direct Purchase