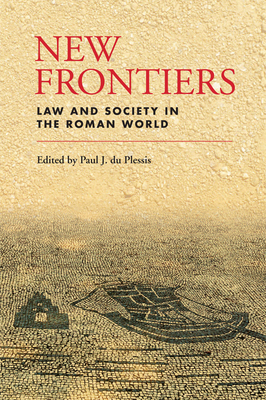 Law and Society in the Roman World

Roman law as a field of study is rapidly evolving to reflect new perspectives and approaches in research. Scholars who work on the subject are increasingly being asked to conduct research in an interdisciplinary manner whereby Roman law is not merely seen as a set of abstract concepts devoid of any background, but as a body of law which operated in a specific social, economic and cultural context. This context-based, 'law and society' approach to the study of Roman law is an exciting new field which legal historians must address. This interdisciplinary collection focuses on three larger themes which have emerged from these studies: Roman legal thought the interaction between legal theory and legal practice and the relationship between law and economics.

Paul J. du Plessis is Senior Lecturer in Civil Law and Legal History at the University of Edinburgh. He is a legal historian whose research interests include Roman law, medieval interpretations of Roman law, Roman-Dutch law, the historical development of the civilian tradition in mixed jurisdictions, the relationship between law and history as well as between law and society in a historical context. Secondary research interests include the development of European Private Law, Comparative Law and International Private Law. He is a member of various organisations dedicated to the study of legal history, sometime webmaster of the Centre for Legal History at Edinburgh University and convener of the Edinburgh Roman Law Group.
Loading...
or
Not Currently Available for Direct Purchase