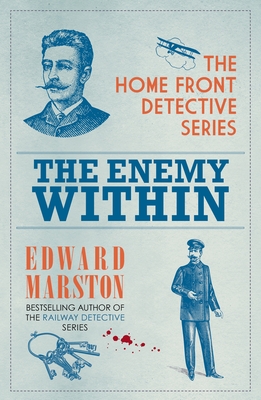 Pentonville Prison. Wally Hubbard is serving a long sentence for arson. But after befriending and tricking one of the officers, Hubbard makes an audacious escape. Inspector Marmion, the detective who arrested Hubbard, is warned to watch his back, but it seems that Hubbard has another target in his murderous sights. However, the investigation is mired in confusion, the identities of killer and victim become increasingly ambiguous. An inmate at an internment camp who might be a spy sending intelligence to the Germans complicates matters further, and the multiplying manhunts, as well as Marmion's concern for his injured and withdrawn son Paul, leave the detective desperate and perhaps with too many threads to untangle.

Edward Marston has written over a hundred books, including some non fiction. He is best known for his hugely successful Railway Detective series. His other current series are the Home Front Detective, set in the Great War, and the Bow Street Rivals, featuring identical twin detectives during the Regency.
or
Not Currently Available for Direct Purchase
Copyright © 2020 American Booksellers Association