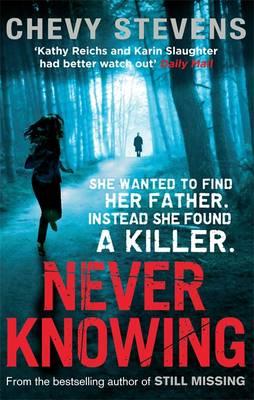 From the acclaimed author of "Still Missing" comes a psychological thriller about one woman's search into her past and the deadly truth she uncovers.

"Never Knowing" is a complex and compelling portrayal of one woman's quest to understand herself, her origins, and her family. That is, if she can survive. . . .

Chevy Stevens is the author of "Still Missing." Before becoming a writer, she worked as a realtor. When she held open houses, she had a lot of time waiting by herself between potential buyers, and Stevens would spend this time scaring herself with all the things that could happen to her. The most terrifying scenario she thought up became the story behind "Still Missing." Stevens grew up on a ranch on Vancouver Island, and she still calls the island home. When she's not writing, she's hiking with her husband and her dog in the local mountains.
Loading...
or
Not Currently Available for Direct Purchase