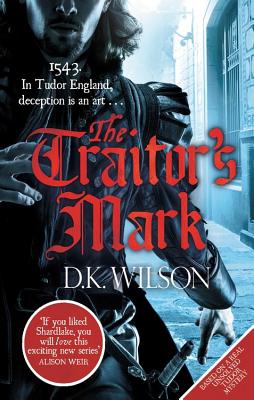 Each novel in this thrilling series of historical mysteries is based on a real unsolved Tudor crime. This second instalment reunites readers with its star, London goldsmith Thomas Treviot.

The Real Crime
Hans Holbein, King Henry VIII's portrait painter, died in the autumn of 1543. A century later a chronicler reported that the artist had succumbed to plague, yet there is no contemporary evidence to support this. Suspicions have been raised over the centuries, but the mystery of what actually happened remains unsolved to this day.

Our Story
Young London goldsmith Thomas Treviot is awaiting a design for a very important jewellery commission from Hans Holbein. When the design fails to turn up, Thomas sends a servant to track Holbein down, only to discover that the painter has disappeared. In his hunt for Holbein and the lost design, Thomas is led into a morass of dangerous political intrigue, Spanish spies and courtiers that is more treacherous than he could ever have anticipated...

The First Horseman is a resounding success that blends fact and fiction to create a gripping, fast moving Tudor crime story that educates as well as fascinates...Wilson has created a compelling character, and the fact that this series will continue to revolve around real life Tudor mysteries is fantastic...unputdownable would be an understatement.—The Bookbag on THE FIRST HORSEMAN

If you liked Shardlake, you will love this exciting new series of novels set in the turbulent age of Henry VIII, Anne Boleyn and Thomas Cromwell, and effortlessly underpinned by the brilliant scholarship for which Derek Wilson is renowned. We feel we are really there, in an authentically evoked Tudor London, hot on the trail of a real-life murder mystery. Highly recommended!—Alison Weir, bestselling author and historian

The sense of period is impeccable, and the reader really gets a sense of how shocking this murder must have been... The story has more twists than a dancing serpent and the pace is relentless, yet it is the characterisation and the little details that make it such a good read.
—Historical Novels Review on THE FIRST HORSEMAN

Wilson wonderfully [evokes] the street-level reality of Tudor-era England in its weathers and sights and smells and even in its unexpected beauties. The plot is charged with genuine suspense
—Christian Science Monitor

[Full of] Murder, kidnapping and intrigue...the fictitious characters blend well with the real protagonists...and the red herrings abounded as they should in any good mystery tale. Recommended.
—Historical Novels Review on THE TRAITOR'S MARK

D.K. Wilson is an historian and expert on the Tudor period, having already published acclaimed non-fiction books on Tudor England and Henry VIII.
Loading...
or
Not Currently Available for Direct Purchase