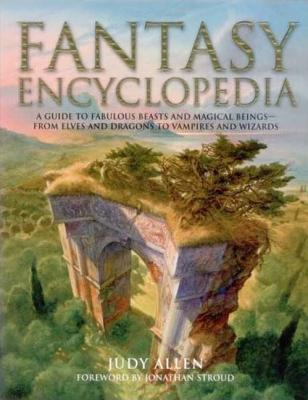 With a foreword by the award-winning fantasy author Jonathan Stroud, and illustration by some of the world's best illustrators including John Howe, the Fantasy Encyclopedia is a spectacular one-stop guide to the creatures and people of folklore and fantasy. From goblins and fairies to dragons and Dracula, this encyclopedia covers them all with sparkling, readable text and stunning illustrations. Discover how the magic of stories throughout the centuries has kept these creatures alive in traditions and cultures around the world. Using a highly visual approach, featuring more than 400 photographs and illustrations, this book will introduce readers to each fantasy character within its habitat and genre. Cross-reference boxes direct readers to popular books and movies starring these fantastical creatures. This is a must-have for any fantasy enthusiast.

Jonathan Stroud is the award-winning fantasy author of The Bartimeus Trilogy, which has just been optioned for production into a major motion picture. Judy Allen is an award-winning author whose novel Awaiting Developments was short-listed for the Whitbread Children's Novel Award. Judy Allen and illustrator Tudor Humphries created Kingfisher's award-winning Backyard Books series and many other successful books, including the Reading Rainbow selections Tiger and Seal. John Howe is a world-renowned fantasy illustrator who is best known for his visualization of the world of J.R.R. Tolkien. His work became one of the foundations for the design of the Peter Jackson movie adaptation of the Lord of the Rings trilogy. Patricia Ludlow has illustrated many children's books, including several on fairies and dragons, as well as the Fantasy Encyclopedia. Nicki Palin is an accomplished illustrator whose work has been short-listed for the Mother Goose Award and the Kate Greenway Medal. Richard Hook is an internationally acclaimed artist, renowned for his paintings of Native American culture.
Loading...
or
Not Currently Available for Direct Purchase