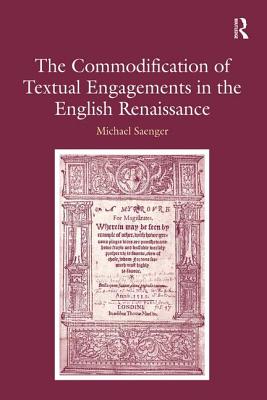 The Commodification of Textual Engagements in the English Renaissance

An investigation into the ways in which early modern books were advertised, this study argues that those means of advertisement both record and help to shape social interactions between people and books. These interactions are not only fascinating in themselves, but also demonstrably linked to larger social phenomena, such as human commodification, the development of English nationalism, the increasingly unruly proliferation of literacy, and changing conceptions of literature. Within the context of recent developments of new textualism and new economic criticism, Saenger's approach makes use of formalist strategies of genre recognition as well as new historicist connections between social history and art. In this study Saenger illustrates his general account of the formal properties of front matter-titles and subtitles, prefatory epistles, and commendatory verses-with engaging readings of specific examples, including Feltham's Resolves, A Myrrovre for Magistrates, and Sidney's Arcadia. He explores the several ways in which paratextual authors sought to involve the reader in various active roles vis vis the main text, whether those books were prose fiction or translated continental sermons. Some particular attention is devoted to printed drama, both because dramatic texts present printers with a unique set of challenges and because those texts have often been misread in recent criticism. This book offers a much-needed analysis of profound transformations-not only to the book trade as an industry, but also to the very concepts of reading and authorship-in an age which saw the relatively brief coincidence of ancient marketing strategies and systems and the burgeoning market of the mechanically reproduced text.

Michael Saenger is Assistant Professor of English at Southwestern University, USA.
Loading...
or support indie stores by buying on