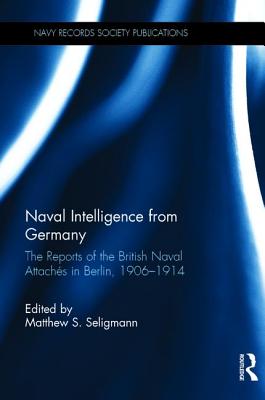 The Reports of the British Naval Attachés in Berlin, 1906-1914 (Navy Records Society Publications)

During the course of the Anglo-German naval race, the British Admiralty found a regular flow of information on Germany's naval policy, on her warship construction and on the technical progress of her fleet to be absolutely vital. It was only on the basis of accurate calculations of Germany's maritime development that the framers of British naval policy could formulate a coherent response to this alarming challenge to the Royal Navy's long-standing supremacy at sea. While numerous sources were available to the Admiralty on the development of the German navy the most important, was the information provided by the British naval attach in Berlin. From his meetings with German officials, conversations at social occasions, visits to naval facilities and shipyards, and personal observations of German naval politics, the British naval attach was able to supply a regular stream of high-grade intelligence to his superiors in Whitehall. This volume examines and illustrates the work of the last four officers to hold the post of naval attach in Berlin before the cataclysm of 1914, Captains Dumas, Heath, Watson and Henderson. By providing examples of their reporting on such crucial matters as the expansion of the German battle fleet, the goals of Admiral von Tirpitz, the development of German naval materiel, including Dreadnoughts, U-boats and airships, this volume of attach correspondence illustrates a fundamental, but neglected, dimension of the Anglo-German naval race before the First World War: namely, the role of the navy's 'man on the spot' in Berlin.

Matthew S. Seligmann is Senior Lecturer in History at the University of Northampton, UK
or
Not Currently Available for Direct Purchase
Copyright © 2020 American Booksellers Association