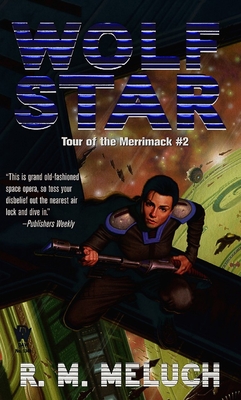 Tour of the Merrimack #2

The U.S. Merrimack was the finest battleship in Earth's fleet, able to withstand the best the Palatine Empire could throw at them. Only her sister ship, the Monitor, was her equal. So when the Palatine forces secretly captured Monitor, Merrimack's security was compromised-and that was just the opening salvo of a whole new stage of war between Palatine and Earth.

Praise For Wolf Star: Tour of the Merrimack #2…

Praise for the Tour of the Merrimack series:

“Meluch shows particular skill in creating memorable characters while exhibiting a refreshing ruthlessness in subordinating them to the logical ramifications of the plot.” —Publishers Weekly (starred review), for The Myriad

“Rousing far-future SF novel.... This is grand old-fashioned space opera, so toss your disbelief out the nearest air lock and dive in.” —Publishers Weekly (starred review), for Wolf Star

“Meluch is an excellent writer, and has a firm grasp of military tactics, character development and storytelling. A good substitute for those waiting for David Weber’s next Honor Harrington novel.” —Sacramento Book Review

“Enough action and suspense for three novels. Meluch’s wry, realistic wit finds the ludicrous in the military, sex in the military, and a dozen other matters. A treat for military sf buffs.” —Booklist, for The Sagittarius Command

“Fast action, hairbreadth escapes, and Meluch’s facility for humor in an astonishing range of situations incum­bent on military life become the order of the day.... A fine yarn to chuckle along with, just like the previous Tour of the Merrimack adventures.” —Booklist, for Strength and Honor

“The Ninth Circle is an immensely readable book that flows very quickly and draws you in withsharp little hooks that demand you finish the book before you dream of beginning any other.” —Seattle Post-Intelligencer

“A lovely sequel with excellent writing and wonderful characters…. This is a great read for people who liked Horatio Hornblower and Jack Aubrey and Daniel Leary.” —SFRevu

“A heart-pounding thrill ride…. Fans of Star Trek and Heinlein alike will enjoy the story…a great story of space warfare and the triumph of the human spirit against insurmountable odds.” —Grasping for the Wind

R. M. Meluch is an American SF writer, and published the first of her Tour of the Merrimack series of military SF/space opera novels in 2005. She can be found at rmmeluch.com.
Loading...
or
Not Currently Available for Direct Purchase