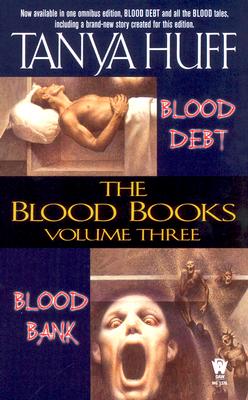 Henry Fitzroy has managed to survive the centuries by obeying the vampires code, never invading another vampire's sanctuary, never slaughtering needlessly. But now he's being forced to do the unthinkable

A ghost has invaded his home, beginning a dangerous nightly game in which Henry is allowed to ask a single question. If the answer is no, an innocent and unsuspecting person is killed. Henry soon comes to the horrifying realization that this wraith and the others who join it is using him to wreak vengeance on the people it holds responsible for its death.

Henry can t find the source of these murders on his own, so he calls on the one person he trusts to help private investigator Vicki Nelson, with the small hope that they can stop these otherworldly forces, without losing their lives.

Tanya Huffmay haveleft Nova Scotia at three, and has lived most of her life since in Ontario, but she still considers herself a Maritimer. On the way to the idyllic rural existence she shares with her partner Fiona Patton, six cats, and a chihuahua, she acquired a degree in Radio and Television Arts from Ryerson Polytechnic an education she was happy to finally use while writing her recent Smoke novels. Of her previous twenty-three books, the five Blood Price, Blood Trail, Blood Lines, Blood Pact, Blood Debt featuring Henry Fitzroy, bastard son of Henry VIII, romance writer, and vampire are among the most popular."
or
Not Currently Available for Direct Purchase
Copyright © 2020 American Booksellers Association