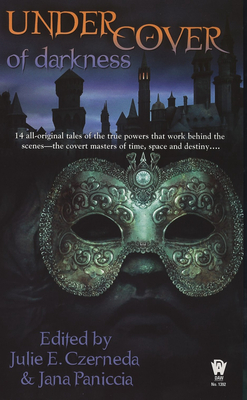 Under Cover of Darkness

FOURTEEN ORIGINAL SHORT STORIES OF SECRET AGENTS AND ORGANIZATIONS THAT HAVE LEFT THEIR MARK ON TIME AND SPACE...

From the true role of the Freemasons to Chronographers who steal pieces of time to an assassin hired by a group that reweaves the threads of history, here are fourteen imaginative tales of time and space and realms beyond our own-all watched over, preserved, or changed by those who work covertly under cover of darkness.

Biologist Julie E. Czerneda's science fiction has received international acclaim, awards, and best-selling status. She is the author of the popular "Species Imperative" trilogy, the "Web Shifters" series, the "Trade Pact Universe" trilogy and her new "Stratification" novels. She was a finalist for the John W. Campbell Award for Best New Writer. Her stand-alone novel, In the Company of Others, won Canada's Prix Aurora Award and was a finalist for the Philip K. Dick Award for Distinguished SF. Julie lives with her husband and two children in the lake country of central Ontario, under skies so clear they could take seeing the Milky Way for granted, but never do.
Loading...
or
Not Currently Available for Direct Purchase