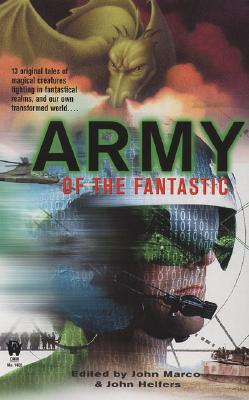 Army of the Fantastic

13 original tales of fantastical battles for anyone who needs a dose of un-reality.

How might the course of World War II have changed if civilized dragons ran bombing missions for the Germans? Here are 13 tales of war in alternate worlds where magical creatures are real and often prove victorious. Human troops fight alongside gryphons, unicorns, and a sea serpent, who can give submarine warfare a whole new slant.

These are just a few of the stories gathered together in this all-original volume that opens the way to magical places in our own world where the armies of the fantastic are on the march, waging wars both vast and personal.

John Marco's debut fantasy series, Tyrants and Kings, earned him a Barnes and Noble Readers Choice Award and has since been translated into numerous languages around the world. In addition to his work as a novelist, he is also a technical communicator, an enthusiast of military history, and a student of psychology. He often spends his free time biking through the parks of his native Long Island, where he lives with his wife Deborah and his son Jack.
Loading...
or
Not Currently Available for Direct Purchase