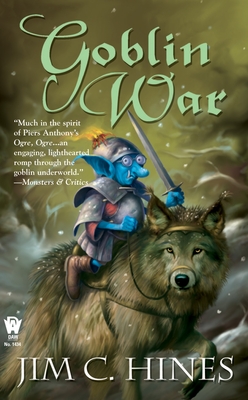 If you think it’s hard being a hobgoblin or a human, try living a goblin’s life for a while. In fact, try imagining what it’s like to be the runtiest goblin in the caves, the lone worshiper of a god who’s been forgotten for a good reason, and the target everyone points to at the first hint of trouble. Try picturing yourself as Jig Dragonslayer, and see how you like it…Despite impossible odds, Jig was still alive. He’d survived an adventurer’s quest against a dragon and a necromancer, a pixie invasion that had ogres and trolls dropping like flies, and, most frightening of all, the threat of being made chief of the goblins. He wasn’t sure how much more he could stand. Naturally, he was about to find out.War was brewing in the world outside the Mountain, and when the goblin’s lair was invaded by human warriors in search of the Rod of Creation, Jig knew it was just the start of another really bad day…