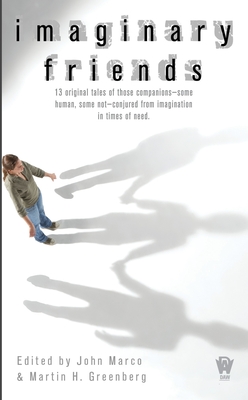 Thirteen original stories about friends conjured in times of need

We?ve all had them. We?ve all needed them. In this fun fantasy anthology, readers are given thirteen variations on what kinds of friends come in handy indeed in times of need. From a toy Canadian Mountie who suddenly comes to life, to a boy and his dragon, to a young woman held captive in a tower and the mysterious being who is her only companion, these highly imaginative tales entertainingly explore the nature of what constitutes a ?real? friendship.

John Marco's debut fantasy series, Tyrants and Kings, earned him a Barnes and Noble Readers Choice Award and has since been translated into numerous languages around the world. In addition to his work as a novelist, he is also a technical communicator, an enthusiast of military history, and a student of psychology. He often spends his free time biking through the parks of his native Long Island, where he lives with his wife Deborah and his son Jack.
In 1995 Martin H. Greenberg was honored by the Mystery Writers of America with the Ellery Queen Award for lifetime achievement in mystery editing. He is also the recipient of two Anthony awards. Mystery Scene magazine called him "the best mystery anthologist since Ellery Queen." He has compiled more than 1,000 anthologies and is the president of TEKNO books. He lives in Green Bay, Wisconsin.
Loading...
or
Not Currently Available for Direct Purchase