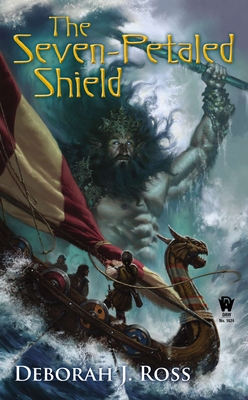 Book One of the Seven-Petaled Shield

Elemental magic existed before mankind was born, and for good or ill, some of this magic seeped into the world, eventually coalescing into a monstrous entity of Fire and Ice, a threat to all humanity. Aided by his six brothers, a legendary king found the means to stand against this incarnation of chaos: the Seven-Petaled Shield. With it, they subdued the entity and imprisoned it in the far North.

But with the passing of generations, the king's line faltered and his once-great city, Meklavar, diminished until it was all but forgotten. Yet within its walls the remnants of the Shield still held power. Unaware of the legendary Shield and hungry only for a mighty empire, the king of Gelon has begun a march of conquest. But what could have been merely ruthless ambition becomes potentially cataclysmic when his unstoppable army turns toward Meklavar.

As the city falls, its newly widowed queen, Tsorreh, flees with her adolescent son, Zevaron, and the heart-stone of the Shield, seeking refuge in her mother's homeland. But with the removal of the heart-stone, the ancient power of Fire and Ice strengthens, spreading its malevolent influence across the land. And this time there is only Tsorreh and her son, desperate heirs to a shattered Shield, to stop it. The Seven-Petaled Shield is the first installment of the thrilling Seven-Petaled Shield series.

Deborah J. Ross is the author of the acclaimed Darkover novels collaborating and following in the footsteps of bestselling writer Marion Zimmer Bradley. Ross became friends with Bradley when she sold a short story for the first Sword and Sorceress anthology. Bradley continued to encourage her over the next two decades, through births, deaths, divorces, a sojourn in France, her literary apprenticeship, four dozen more short stories, two novels, and finally her work with Darkover. Ross is also the author of The Seven-Petaled Shield series. Ross now lives in California with her husband, writer Dave Trowbridge. She can be found online at deborahjross.blogspot.com.

“Deborah has contrived to express the rich tapestry of the characters and backdrop of Darkover in a way that would make Marion proud.” — ConNotations (for Darkover series)

“Fans will be pleased, and those new to the world of Darkover have a treat in store.” — VOYA (for Darkover series)

“Deborah has contrived to express the rich tapestry of the characters and backdrop of Darkover in a way that would make Marion proud.” —ConNotations (for Darkover series)

"Interesting women as well as men, varied worlds with a sense of history, magic that evokes a sense of wonder, poetry, laughter as well as exciting action.... [A] grand tapestry of story." —Sherwood Smith, author of Inda

"A world that feels very real, interesting characters I can care about, lots of depth in both world and characters, heroes and villains alike, action, suspense, thoughtfulness.... I'll be waiting eagerly for the sequels." —K.V. Johansen, author of Blackdog