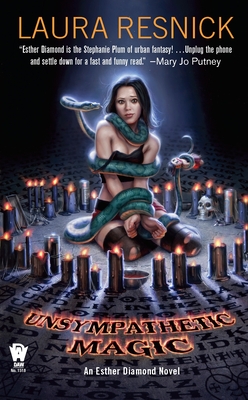 Acting jobs don't grow on fire escapes, so struggling actress Esther Diamond is outraged when her guest role as a hooker on controversial TV drama The Dirty Thirty is jeopardized by zombies, angry spirits, and a voodoo curse. Meanwhile, the talented teens Esther is coaching at a Harlem cultural center are also being attacked by the sinister supernatural power that's spreading through Manhattan. Since the show must go on, Esther boldly helps her friend, the 350-year-old sorcerer Dr. Maximillian Zadok, combat the Evil forces at work—all while attempting to salvage her love life with her would-be lover, Detective Connor Lopez. But will Esther's courage backfire and end up leading her to become a human sacrifice on the altar of the sinister supernatural powers that are taking over New York City?

Unsympathetic Magic is the exciting third installment of the Esther Diamond series.

"Plenty of humor, action, magic, and a bit of romance make this urban fantasy a sure favorite. Don’t miss this exceptional series." —SciFiChick.com "

"Unsympathetic Magic by Laura Resnick may be one of the funniest, wittiest, most intriguing books I’ve read in a while. Even if I weren’t fascinated by Vodou and delicious detectives, I would have fallen in love with this book." —Bitten by Books

"...a tightly woven, madcap dash of a story that manages to weave religious practices, seedy television, hilarious situational humor, snappy dialogue, mythical stinky creatures, and an utterly believable cast of characters into a tapestry that you’ll have a hard time taking your eyes off of." —Gravetells