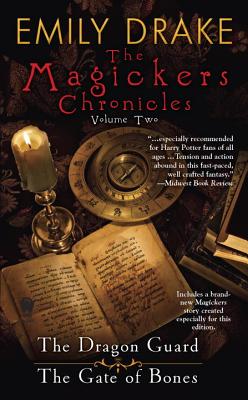 The final battle between the Magickers, who believe in using magic for good, and the Dark Hand, who want to use magic only for their own ends, has begun. Now it's up to Jason Adrian and the other children with "talent" to defeat the forces of darkness.

Emily Drake lives in a sand castle by the sea…well, actually, it’s a dusty house full of wonderful old books, cats, and a rambunctious cocker spaniel puppy. And, on a good day when the smog clears, you can see the Pacific Ocean. When she’s not reading or talking with the cats or playing with the puppy, she is thinking of Bailey-isms and writing. Somewhere in the house is a grown-up daughter who likes to read and write histories of the fantastic and brings home pottery from class which looks as if it must have been made in another realm, so she fits in extremely well. Emily is married to a nice gentleman who works very hard in the real world and is often a bit bemused by the goings-on in the sand castle but has a good sense of humor about it all. There are other sons and a daughter who are scattered to the Trade Winds but who write and call home often. All in all, a good day is one in which books can be read and written and enjoyed by anyone Emily can reach. At the moment, the pup only considers a book as a good chew-toy, but she’s hoping he’ll outgrow that. Emily does not normally talk about herself like this, but the cats insisted upon it, like royalty.
Loading...
or
Not Currently Available for Direct Purchase