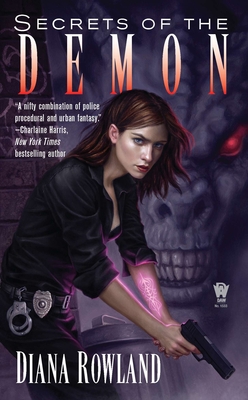 Secrets of the Demon

Homicide detective Kara Gillian has a special talent: she can sense the "arcane" in our world, and there's quite a bit of it, even in Beaulac, Louisiana. She's also a summoner of demons, and works on a task force that deals with supernatural crimes. Her partners are attractive and smart FBI agents, but they're not summoners, and they're not telling Kara why they are on this special force with her.

To complicate things even more, Kara has pledged herself to one of the most powerful of demons—Demon Lord Rhyzkahl—who helped save her partner's life, but now expects things in return. Meanwhile, she's trying to solve a string of murders that are somehow tied together by money, sex, rock music and...mud. But how can she concentrate on the case when she's not even sure who—or what—her partners are? Secrets of the Demon is the exciting third installment of the Kara Gillian series.

"Rowland’s hot streak continues as she gives her fans another big helping of urban fantasy goodness! ... The plot twists are plentiful and the action is hard-edged. Another great entry in this compelling series." —RT Book Reviews

"This is an excellent police procedural urban fantasy that like its two previous arcane forensic investigations stars a terrific lead protagonist... the Bayou heats up with another magical mystery tour that will take readers away from the mundane to the enjoyable world of Diana Rowland." —Midwest Book Review

"The sex definitely sizzles, the characters are engaging, the world is intriguing, and action pulled me right in. Highly recommended!" —Errant Dreams

"Readers of books one and two in Diana Rowland's series will definitely not be disappointed by this third installment. Rowland once again writes the perfect blend of police procedural and paranormal fantasy." —Night Owl Paranormal

"Diana Rowland has built a fascinating and compelling urban fantasy series, with main character Kara as tough as she needs to be yet vulnerable enough to be realistic." —Fresh Fiction

"Phenomenal world building, a tough yet vulnerable heroine, a captivating love triangle, and a increasingly compelling metanarrative that just gets juicier with each book.... Blows most other urban fantasies out of the park." —All Things Urban Fantasy

Diana Rowland has lived her entire life below the Mason-Dixon line. She has worked as a bartender, a blackjack dealer, a pit boss, a street cop, a detective, a computer forensics specialist, a crime scene investigator, and a morgue assistant, which means that she's seen more than her share of what humans can do to each other and to themselves. She won the marksmanship award in her Police Academy class, has a black belt in Hapkido, and has handled numerous dead bodies in various states of decomposition. She presently lives in southern Louisiana with her husband and her daughter where she is deeply grateful for the existence of air conditioning. A master of urban fantasy, she’s the author of the Demon series and the White Trash Zombie series. She can be contacted via her website, www.dianarowland.com.
Loading...
or support indie stores by buying on
(This book is on backorder)