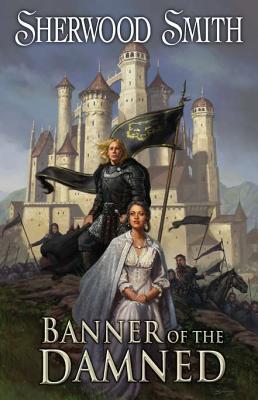 Banner of the Damned

Princess Lasva is about to be named heir to her childless sister, the queen. But, when the queen finally bears an heir, Lasva's future is shattered. Grief-stricken, she leaves her country of Colend and falls into the arms of Prince Ivandred of Marloven Hesea. His people are utterly different-with their expertise in riding, weaponry, and magic- and the two soon marry.

When the sensational news makes its way to Lasva's sister, the queen worries for Lasva at the hands of the Marlovens, whose king's mage is in league with the magical land of Norsunder-considered by Colendi to be their enemy. The queen orders Emras, a scribe, to guard Lasva.

But it may be too late-Lasva is already deeply involved with the Marlovens and their magic. War wages on, and all are forced to redefine love, loyalty, and power...

Sherwood Smith started making books out of paper towels at age six. In between stories, she studied and traveled in Europe, got a Masters degree in history, and now lives in Southern California with her spouse, two kids, and two dogs. She s worked in jobs ranging from counter work in a smoky harbor bar to the film industry. Writing books is what she loves best. She s the author of the high fantasy "History of Sartorias-deles "series as well as the modern-day fantasy adventures of Kim Murray in "Coronets and Steel." Learn more at www.sherwoodsmith.net."
Loading...
or
Not Currently Available for Direct Purchase