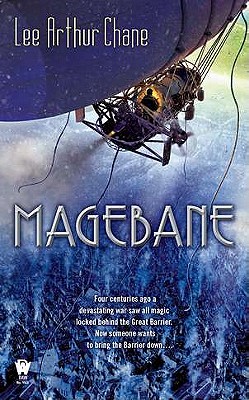 Four centures ago, the world changed. A devastating war swept the lands, and the MageLords, who had long ruled by virtue of their spell powers, were driven to a distant place, separated from those they had ruled by a magical Barrier. With magic banished from the rest of the world, the MageLords became mere legend and people turned to science to improve their lives. But if one man has his way, all that is about to change...

Born in the mystical mountains of New Mexico, taken on an epic journey from there to the wide-open and oddly named land of Saskatchewan as a child, familiar with both blazing heat and bitter cold, Lee Arthur Chane might have been destined to be a fantasy writer. But in his personal quest to become one, he’s also studied journalism in Arkansas, become a newspaper reporter, photographer and editor, written exhibit copy for a science centre, penned a weekly science column, hosted a television show, and performed professionally as an actor and singer in plays, musicals and operas.

Despite overthrowing kingdoms in his writing, he’s currently a loyal subject of Her Majesty Queen Elizabeth II, residing in Canada with his wife and his own personal pre-teen princess.

See more at: www.leearthurchane.com.
Loading...
or
Not Currently Available for Direct Purchase