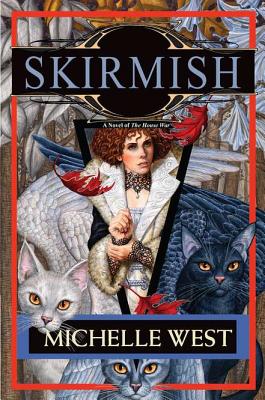 When Jewel ATerafin returns home from the war in the South, she arrives moments too late to prevent the demonic assassination of Amarais ATerafin—The Terafin, head of House Terafin. Now the battle to become The Terafin and claim the House Seat will begin. Four candidates have declared themselves, but Jewel, The Terafin’s own secretly designated choice to become the next head of the House, has yet to announce her intentions.

Jewel does not want to make any decisions before The Terafin is laid to rest. But as enemies of the House and Empire mobilize, it becomes terrifyingly clear that everyone—including Jewel and her otherworldly allies—must survive the three days of the funeral rites before they can even be certain there will be a House Terafin left to fight over....

Michelle West is the author of three interconnected series: The Sacred Hunt duology, the six-volume Sun Sword series, and The House War novels. She has published numerous short stories and fantasy novels under her maiden name, Michelle Sagara. She was a two-time nominee for the Campbell Award. She works part-time at BAKKA Books, one of Toronto’s larger bookstores, and writes a column for The Magazine of Fantasy & Science Fiction. She can be contacted via her website, michellesagara.com or on Twitter at @msagara.
or
Not Currently Available for Direct Purchase