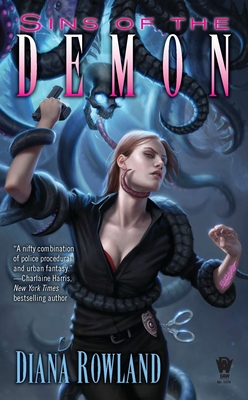 Sins of the Demon

Louisiana homicide detective Kara Gillian is doing her best to cope with everything that's happened to her over the past year, all while s continuing to hone her skills as a demon summoner. But lately she's beginning to wonder if there's a little too much demon in her world. She has a demon for a roommate, the demonic lord Rhyzkahl is still interested in her for reasons she can't fathom, and now someone in the demon realm is trying to summon her. And there's no way that can end well.

Meanwhile, people who've hurt Kara in the past are dropping dead. Kara is desperate to find the reasons for the deaths to clear her own name, but when she realizes there's an arcane pattern to the deaths, she knows that both the human and the demon worlds may be at risk unless she finds out who's behind it all. She's in a race against the clock and in a battle for her life that just may take her to hell and back.Sins of the Demon is the exciting fourth installment of the Kara Gillian series.

"With each new chapter in this mesmerizing UF series, the gifted Rowland constructs her world and adds depth to her characters, all while giving readers clues to the over-arching plotline. This book’s cliffhanger ending will have readers gnashing their teeth waiting for the next installment!" —RT Book Reviews

"Yet again, Diana Rowland has knocked my socks off with a stellar book that left me positively desperate for more. Trust me, you won't want to miss this!" —A Book Obsession

"Rowland certainly ranks with the best of them, and she’s an author whose books I look forward to with great anticipation. Sins of the Demon has humor, action and great storytelling, and it features a likeable and witty heroine who kicks a lot of butt along the way. Pick up this series if you haven’t already!" —Owlcat Mountain