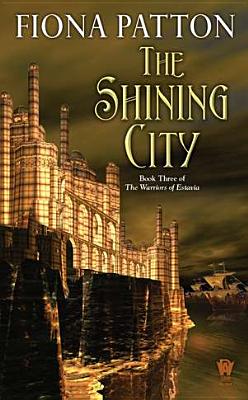 The Shining City (The Warriors of Estavia #3)

Anavatan rests on the shore of shining Gol-Beyaz, the Silver Lake. The city and its outlying villages are surrounded by the God-Wall, a magical barrier that protects from both the nomadic human invaders that attack each year, and the hungry spirits which are drawn to the living energies of the Silver Lake. It is here in the heart of Gol-Beyaz that, long ago, the Gods were born.

With the young God Hisar ready to stake his claim to a place in the pantheon of Anavatan, a long-prophesied time of chaos and change is fast approaching. Sworn enemies, Spar and Graize both had a part in Hisar’s creation and his growth. If they can overcome their hatred and distrust, perhaps they can help the young God to survive.

Brax, the sworn champion of the Goddess Estavia, may be forced to do the unthinkable, and divide his allegiance to the Gods, a course of action that could destroy the warrior and shift the balance of power—and lead to the downfall of the Shining City....

Praise For The Shining City (The Warriors of Estavia #3)…

"The characters have become memorable to readers and will be hard to say good-bye to upon setting the book down. Fiona Patton handles the plot very well. Readers will not have a hard time becoming engrossed as the plot is fast-paced for the most part. There is enough action to keep you satisfied and the complicated relationships between the characters will keep readers on their toes... The Shining City is a very satisfying read."
—Fresh Fiction

"The depiction of the divine in these books is dazzling. It’s so original and fascinating that even without all of the emotion, heartbreak, and action, I’d still find this series completely engrossing. It’s the best look I’ve ever seen at what it might be like to live with gods who consistently interfere in their followers’ lives."
—Errant Dreams

"This book by Fiona Patton is well written and an enticing novel that caught my eye just by the title. Patton will blow you away with her dexterous descriptions and delectable dialogue.... Patton has created a new world that is both mysterious and enthralling. This fast-paced novel will not leave you disappointed."
—Lit Pick

"The final Warriors of Estavia (see The Golden Tower and The Golden Sword) is an exciting climax that ties up all the major threads to a strong epic fantasy trilogy."
—SFF Chronicles

Fiona Patton lives on seventy-five acres of rural Ontario scrubland with her partner Tanya Huff, six cats, and one tiny little dog. She has written more than twenty short stories ranging from heroic fantasy to horror to science fiction, as well as fantasy novels The Stone Prince, The Painter Knight, The Granite Shield, and The Golden Sword.
Loading...
or
Not Currently Available for Direct Purchase