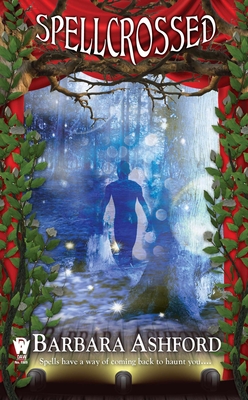 IT’S NOT EASY LOSING THE MAGIC IN YOUR LIFE…

But when Maggie Graham freed Rowan Mackenzie to return to Faerie, she took the first step toward her new life as director of the Crossroads Theatre. A hectic new season of summer stock leaves her little time to moon over the past. She has to balance the demands of her interfering board president and a company of actors that includes bewildered amateurs, disdainful professionals, a horde of children, and an arthritic dog. And while Maggie yearns to give others the kind of healing she found at the Crossroads, even she recognizes that magic must take a back seat to ticket sales.

But magic is hard to banish from the old white barn. Memories lurk like ghosts in the shadowy wings and the unexpected is as time-honored a tradition as the curtain call. And when the tangled spells of Maggie’s past turn her life upside down, it will take more than faery magic to ensure the happy-ever-after ending she longs for….

"There's a vast but little known overlap between fans of fantasy and fans of musical theater, and Barbara Ashford hits the sweet spot on both with Spellcast. It's warm, humorous, emotional, heartfelt, and full of magic. Curse you, Barbara, for making me cry! And for getting 'Some Enchanted Evening' stuck in my head all week."
—New York Times bestselling author Carrie Vaughn

"One of those rare gems...something completely unique in the pantheon of novels I have read over a lifetime. It is a love story, a fantasy, a mystery, and a theatre book all rolled up into one."
—New Myths (for Spellcast)

"A charming fantasy novel [that] left me wanting more, in fine theatrical tradition."
—Locus (for Spellcast)

"Barbara Ashford draws upon her own theater experience, pouring a bit of herself into Maggie Graham, and the resulting mix of musical theater and fantasy is nothing short of fantastic."
—New York Journal of Books (for Spellcast)

Barbara Ashford grew up in Wilmington, Delaware and began her theatrical debut at an early age. After performing all over in converted playhouses from barns to churches to used car showrooms, she gave up performance to write musical theatre. Eventually she returned to fiction, using her theatre background to create the novel that became Spellcast. Barbara Ashford can be found at barbara-ashford.com.
Loading...
or support indie stores by buying on