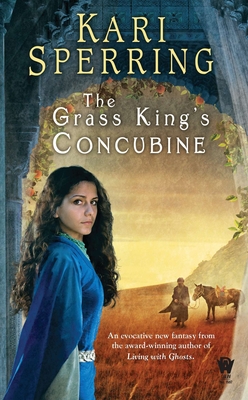 Kari Sperring's first novel was a finalist for the Crawford Award, a Tiptree Award Honor Book, a LOCUS Recommended First Novel, and the winner of the Sydney J. Bounds Award for Best Newcomer. Now she returns to the same amazing and atmospheric world with an entirely new story set several hundred years after the earth-shaking events of Living With Ghosts.

When a wealthy young woman, obsessed with a childhood vision of a magical Shining Palace, sets out with her true love to search for a legendary land, she discovers the devastated WorldBelow - the realm of the Grass King - and the terrifying Cadre, who take her prisoner, and demand she either restore the king's concubine... or replace her.

Praise For The Grass King's Concubine…

"[The Grass King's Concubine] entirely delighted me. And, by turns, impressed me.... In many ways, this is a meditative novel, playfully serious, lucidly written." — Ideomancer Reviews

Kari Sperring has been writing as long as she can remember and completed her first novel at the age of eight (twelve pages long and about ponies). She started writing fantasy in her teens, inspired by J. R. R. Tolkien, Alexandre Dumas and Thomas Mallory. She holds a B.A and a PhD in medieval history from Cambridge University, and as Kari Maund has written and published five books and many articles on Celtic and Viking history and co-authored a book on the history and real people behind her favourite novel, The Three Musketeers. She’s been a barmaid, a tax officer, a P.A. and a university lecturer, and has found that her fascinations, professional or hobby-level, feed and expand into her fiction. Living With Ghosts evolved from her love of France and its history, ghosts, mysteries, Celtic culture, strange magic and sword fights. Her novel-in-progress has even found a creative role for bookkeeping. She’s British and lives in Cambridge, England.
Loading...
or support indie stores by buying on