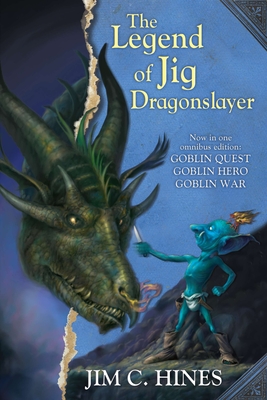 The Legend of Jig Dragonslayer

If you think being a big, strong, brave fantasy hero is hard... just try being Jig the Goblin.

Here, together for the first time, are the uproarious, unforgettable adventures of Jig the Goblin—the most unlikely hero you will ever meet. In this collected omnibus of Goblin Quest, Goblin Hero, and Goblin War, readers will follow the epic (if mostly accidental) exploits of Jig: a puny, clumsy, bespectacled runt of a goblin whose intelligence, wit, and unbelievable luck allow him to survive when fate thrusts him into a world much larger—and far more dangerous—than any he ever imagined...

Praise For The Legend of Jig Dragonslayer…

"The characterizations are wonderful. Hines is a phenomenal worldbuilder...not only inventive and funny, his people and his world are convincing. That's magic of the most powerful king." —SF Site

"The mixture of heroism and buffoonery put the Goblin series into a fantasy class of its own." —SF Revu