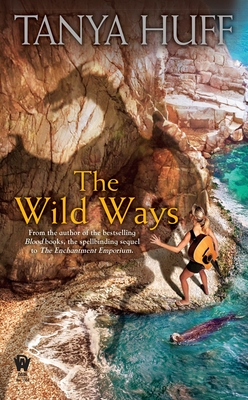 "The Gales are an amazing family, the aunts will strike fear into your heart, and the characters Allie meets are both charming and terrifying." -#1 New York Times bestselling author Charlaine Harris

Alysha Gale's cousin Charlotte is a Wild Power, who allies herself with a family of Selkies in a fight against offshore oil drilling. The oil company has hired another of the Gale family's Wild Powers, the fearsome Auntie Catherine, to steal the Selkies' sealskins. To defeat her, Charlotte will have to learn what born to be Wild really means in the Gale family...

Tanya Huff may have left Nova Scotia at three, and has lived most of her life since in Ontario, but she still considers herself a Maritimer. On the way to the idyllic rural existence she shares with her partner Fiona Patton, six cats, and a chihuahua, she acquired a degree in Radio and Television Arts from Ryerson Polytechnic—an education she was happy to finally use while writing her recent Smoke novels. Of her previous twenty-three books, the five—Blood Price, Blood Trail, Blood Lines, Blood Pact, Blood Debt—featuring Henry Fitzroy, bastard son of Henry VIII, romance writer, and vampire are among the most popular.

Praise For The Wild Ways…

“Zingy characterizations and a quick pace are the book’s strong points.... Fans of the previous book will hit the ground running.” —Publishers Weekly

"Combining Celtic folklore, musical references, and a love of nature and magic, this sequel to The Enchantment Emporium will appeal to Huff’s many fans and to readers who like their urban fantasy with more depth and character development.” —Library Journal

“Quintessential Huff -- sharp, clean, funny. A heady mix of music, place and people that rings true on every level. Once again, I find myself hoping that this is a series that will go on.” —Green Man Review

"Combined with Huff’s ability to blend ancient traditions seamlessly into the modern world and making them seem perfectly normal and characters who are appealing and fun to hang out with, you’re in for an amazing read. A perfect example of how there’s more to urban fantasy than teenage girls swooning over the undead and how so many others are failing to exploit the genre’s full potential.” —Seattle Post-Intelligencer
or support indie stores by buying on
Copyright © 2020 American Booksellers Association