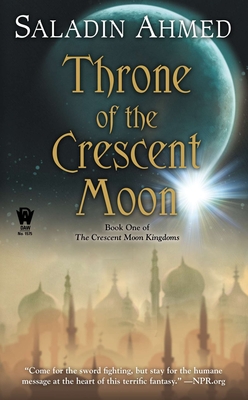 Throne of the Crescent Moon

"Ahmed is a master storyteller in the grand epic tradition." —N. K. Jemisin

The Crescent Moon Kingdoms, home to djenn and ghuls, holy warriors and heretics, are at the boiling point of a power struggle between the iron- fisted Khalif and the mysterious master thief known as the Falcon Prince. In the midst of this brewing rebellion a series of brutal supernatural murders strikes at the heart of the Kingdoms. It is up to a handful of heroes to learn the truth behind these killings.

Doctor Adoulla Makhslood, "the last real ghul hunter in the great city of Dhamsawaat," just wants a quiet cup of tea. Three score and more years old, he has grown weary of hunting monsters and saving lives, and is more than ready to retire from his dangerous and demanding vocation. But when an old flame's family is murdered, Adoulla is drawn back to the hunter's path.

Raseed bas Raseed, Adoulla's young assistant, is a hidebound holy warrior whose prowess is matched only by his piety. But even as Raseed's sword is tested by ghuls and manjackals, his soul is tested when he and Adoulla cross paths with the tribeswoman Zamia.

Zamia Badawi, Protector of the Band, has been gifted with the near- mythical power of the lion-shape, but shunned by her people for daring to take up a man's title. She lives only to avenge her father's death. Until she learns that Adoulla and his allies also hunt her father's killer. Until she meets Raseed.

When they learn that the murders and the Falcon Prince's brewing revolution are connected, the companions must race against time-and struggle against their own misgivings-to save the life of a vicious despot. In so doing they discover a plot for the Throne of the Crescent Moon that threatens to turn Dhamsawaat, and the world itself, into a blood-soaked ruin.


Praise For Throne of the Crescent Moon…

"A genuinely brisk, bold, and colorful diversion.... Flashing swords, leaping bandits, holy magic, bloodthirsty monsters, and sumptuous cuisine... What more do you want me to do, draw you a map? Read this thing." —Scott Lynch, New York Times-bestselling author of The Lies of Locke Lamora

"Swashbuckling adventure, awesome mystery, a bit of horror, and all of it written beautifully. A real treat!" —N. K. Jemisin, Hugo Award-winning author of The Fifth Season

“The Arabian Nights theme dominates, and in language, style and approach.... Equally impressive are characters who struggle not only against their opponents but against their own misgivings and desires.” —Kirkus (starred)

“The maturity and wisdom of Ahmed’s older protagonists are a delightful contrast to the brave impulsiveness of their younger companions.” —Library Journal (starred)

“I love the way Saladin Ahmed creates his story, lovingly portraying his characters and his settings, bringing them all to vivid life.” —Rick Riordan, #1 New York Times-bestselling author the Percy Jackson series

"This promising debut offers a glimpse of a dusty and wonderful fantasy city through the eyes of three engaging, unconventional protagonists." —Elizabeth Bear, Hugo Award-winning author of Karen Memory

“An exciting and classic fantasy plot, monstrous ghuls, and a marvelously-described world.... You should absolutely read it for its world-weary, sarcastic hero, Doctor Adoulla Makhslood, who is fat and old and out-of-shape and ready to retire and yet unable to do so because of his sense of duty; he is utterly wonderful because he is not like any other hero in an epic fantasy novel.”—Kate Elliott, author of Cold Magic

"Throne of the Crescent Moon is colorful, magical, exciting, and moving. Saladin Ahmed delivers a beautiful story of a demon hunter in an Arabian Nights setting. An excellent first novel!" —Kevin J. Anderson, New York Times-bestselling author of The Dark Between the Stars

“Ahmed is not your typical fantasy writer, and this is no ordinary debut novel. With deft plotting, painstaking characterization, and fluid prose, Ahmed brings us a riveting adventure, complete with stunning magics and compelling intrigue. A thoroughly enjoyable read from one of the genre’s rising stars.” —David B. Coe, Crawford award-winning author of The Dark-Eye’s War

“Ahmed's writing is deft and graceful, and his characters move through a world of real stakes and significant consequences, much to their cost. Combine this with glorious setting and his careful mastery of craft, and you have a lovely fantasy read on your hands.” —Jay Lake, award-winning author of Green

“A fun, fast-moving story where good is good, evil is evil, but there’s still room for political turmoil and intrigue alongside spells, swordplay, and undead monsters.” —AV Club

"Ahmed spins a seriously engaging adventure tale.... One of the many pleasures of Throne of the Crescent Moon—aside from Ahmed's skill at making his monster fights feel positively cinematic—are all the realistic little details of life in a city riddled with magic." —io9

“Extraordinary... Chances are very good that you’ll find Throne of the Crescent Moon to be one of the best novels you read this year.” —B&N Explorations

“The vivid world of the Crescent Moon Kingdoms is rich with allusions to Middle Eastern folklore and culture.... Ahmed uses this setting to deliver a well-crafted, fast-paced adventure with a highly entertaining cast of characters, each with a distinctive voice.” —Tor.com

“A delight in every imaginable way.” —The Magazine of Fantasy & Science Fiction

“There’s a wonderful soul to Throne of the Crescent Moon and, with all the skill and eloquence he showed in his short fiction, Ahmed has brought to life a wonderful cast of characters and introduced readers to a thrilling and interesting new world to explore.” —Aidan Moher, A Dribble of Ink

Saladin Ahmed was born in Detroit and raised in a working-class, Arab American enclave in Dearborn, Michigan. His short stories have been nominated for the Nebula and Campbell awards, and have appeared in Year’s Best Fantasy and numerous magazines, anthologies, and podcasts, as well as being translated into five foreign languages. Throne of the Crescent Moon won a Locus Award for Best First Novel and was a finalist for the Hugo, Nebula, and David Gemmell Morningstar awards. Find him on Twitter at @saladinahmed.
Loading...
or support indie stores by buying on