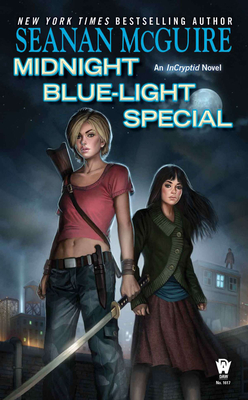 The second book in New York Times-bestselling Seanan McGuire's witty urban fantasy InCryptid series about a family of cryptozoologists who act as a buffer between humans and the magical creatures living in secret around us.

Abnormal, adjective: Deviating from the common type, such as playing monster-human on the rooftops of Manhattan. See also "Verity Price."

The Price family has spent generations studying the monsters of the world, working to protect them from humanity—and to protect humanity from them. Verity Price is just trying to do her job, keeping the native cryptid population of Manhattan from getting into trouble, and doing a little ballroom dancing on the side.

Enter Dominic De Luca, an operative for the Covenant of St. George, and Verity's on-again, off-again boyfriend. When he tells her that the Covenant is sending a full team to assess how ready the city is for a purge, Verity finds herself between a rock and a hard place. Stay, and risk her almost-certain death, or flee, and leave the cryptids of New York with nothing between them and the Covenant.

With allies and enemies on every side, and no safe way to turn, it's going to take some quickstepping for Verity to waltz out of this one. There's just one question on everyone's mind: Is this the last dance for Verity Price?

Seanan McGuire is a Washington State-based author with a strong penchant for travel and can regularly be found just about anyplace capable of supporting human life (as well as a few places that probably aren’t). Early exposure to a vast number of books left her with a lifelong affection for the written word, and led, perhaps inevitably, to her writing books of her own, starting somewhere around the age of eleven. The October Daye novels are her first urban fantasy series, and the InCryptid novels are her second series, both published by DAW and both of which have put her in the New York Times bestseller list. Seanan was the winner of the 2010 John W. Campbell Award for Best New Writer; Rosemary and Rue, the first novel in the October Daye series, was named one of the Top 20 Paranormal Fantasy Novels of the Past Decade; and her novel Feed, written under the name Mira Grant, was named as one of Publishers Weekly's Best Books of 2010. She also won a Hugo for her podcast, and is the first person to be nominated for five Hugo Awards in a single year. You can visit her at www.seananmcguire.com.
Loading...
or support indie stores by buying on