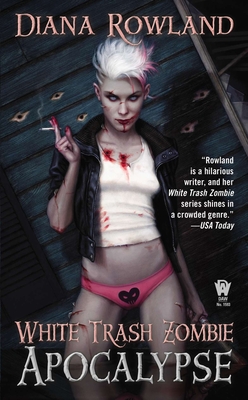 Our favorite white trash zombie, Angel Crawford, has enough problems of her own, what with dealing with her alcoholic, deadbeat dad, issues with her not-quite boyfriend, the zombie mafia, industrial espionage and evil corporations. Oh, and it’s raining, and won’t let up.

But things get even crazier when a zombie movie starts filming in town, and Angel begins to suspect that it’s not just the plot of the movie that's rotten. Soon she's fighting her way through mud, blood, bullets and intrigue, even as zombies, both real and fake, prowl the streets.

Angel’s been through more than her share of crap, but this time she’s in way over her head. She’ll need plenty of brainpower to fit all the pieces—and body parts—together in order to save herself, her town, and quite possibly the human race.

At least for now.

Diana Rowland has lived her entire life below the Mason-Dixon line. She has worked as a bartender, a blackjack dealer, a pit boss, a street cop, a detective, a computer forensics specialist, a crime scene investigator, and a morgue assistant, which means that she's seen more than her share of what humans can do to each other and to themselves. She won the marksmanship award in her Police Academy class, has a black belt in Hapkido, and has handled numerous dead bodies in various states of decomposition. She presently lives in southern Louisiana with her husband and her daughter where she is deeply grateful for the existence of air conditioning. A master of urban fantasy, she’s the author of the Demon series and the White Trash Zombie series. She can be contacted via her website, dianarowland.com, or on Twitter at @dianarowland.
Loading...
or support indie stores by buying on