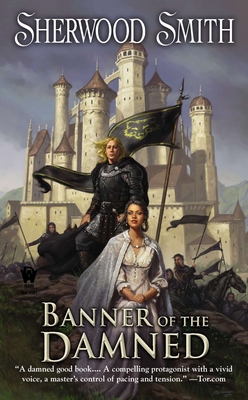 Banner of the Damned

"Smith should rank high on any list of military writers.... A first-rate author boldly at play." —SF Signal

Emras is the most diligent of students, and she wants nothing more than to become royal scribe for the intelligent and beautiful Princess Lasva. And Emras gets her wish.

But life becomes complicated in ways she could never have foreseen. For though Emras adores the princess, she has been charged with a secret mission for the queen: to search her new home for signs of the evil magical influence of Norsunder—a kingdom once thought legendary, but now known to be real. Emras knows nothing of magic, but finds a knowledgeable and willing tutor in the barbaric land of Marloven Hesea.

Was the queen right? Is there a connection between Norsunder and Marloven Hesea? And if Emras was acting on orders from her queen, why is she now on trial?

Praise For Banner of the Damned…

Praise for Banner of the Damned:

"A damned good book.... A compelling protagonist with a vivid voice, a master's control of pacing and tension." —Tor.com

"Smith should rank high on any list of military writers.... The cavalry battles, hand-to-hand strategy sessions, the aftermaths of battles, these scenes in Banner of the Damned roll across the page with effortless mastery.... A first-rate author boldly at play." —SF Signal

Sherwood Smith started making books out of paper towels at age six. In between stories, she studied and traveled in Europe, got a Masters degree in history, and now lives in Southern California with her spouse, two kids, and two dogs. She’s worked in jobs ranging from counter work in a smoky harbor bar to the film industry. Writing books is what she loves best. She’s the author of the high fantasy Sartorias-deles series as well as the modern-day fantasy adventures of Kim Murray in Coronets and Steel. Learn more at www.sherwoodsmith.net.
Loading...
or
Not Currently Available for Direct Purchase