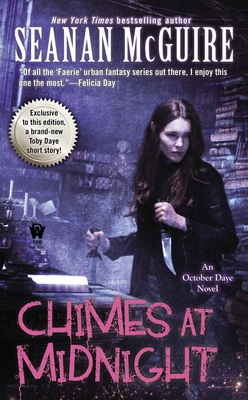 Things are starting to look up for October "Toby" Daye. She's training her squire, doing her job, and has finally allowed herself to grow closer to the local King of Cats. It seems like her life may finally be settling down...at least until dead changelings start appearing in the alleys of San Francisco, killed by an overdose of goblin fruit.

Toby's efforts to take the problem to the Queen of the Mists are met with harsh reprisals, leaving her under sentence of exile from her home and everyone she loves. Now Toby must find a way to reverse the Queens decree, get the goblin fruit off the streets--and, oh, yes, save her own life.

And then there's the question of the Queen herself, who seems increasingly unlikely to have a valid claim to the throne....To find the answers, October and her friends will have to travel from the legendary Library of Stars into the hidden depths of the Kingdom of the Mists--and they'll have to do it fast, because time is running out.

"This installment bumped this series up to the top of my urban-paranormal series list! … Highly recommend it, can't wait for the next! Of all the 'Faerie' urban fantasy series out there, I enjoy this one the most. If you like the Dark Fever series or Kate Daniels series, you'll def like this one." —Felicia Day

"McGuire applies a hard-boiled mentality and a keen appreciation for mythology to a blend of politics, magic, and romance to make this the most entertaining series installment to date." —Publisher's Weekly

"Fast-paced, without ever being frantic, with excellent characterization.... McGuire is a dab hand at dialogue, and the bantering between Toby and everyone--especially Tybalt--is one of the highlights of the book." —RT Book Reviews

"The October Daye series is one of those delicious worlds that becomes more and more beloved with each visit, and Ashes of Honor is my favorite of this series to date." —All Things Urban Fantasy

“Lots of portal hopping, visits to some of Toby’s old friends, and some deadly encounters keep things lively as the tension builds to a dramatic conclusion.” —Locus

"[McGuire] tells her story with energy and charm.... It’s all so much fun." —SF Signal

"Strong and evocative.... It has everything you could want: strong characters, detailed settings, and an engrossing plot." —Owlcat Mountain

"I love that Toby is a strong, independent--yet still vulnerable--heroine. I love that this is a world where people die, where consequences matter. I love the complex world-building and mythology. I love the almost film noir tone of the series. I love that each book leaves me wanting more. If you dig urban fantasy, this is one of the best out there." —CC2K