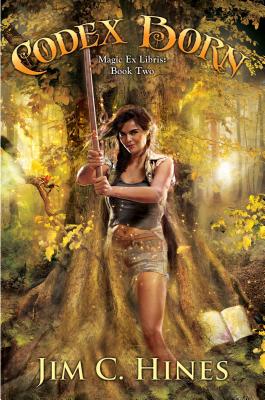 Five hundred years ago, Johannes Gutenberg discovered the art of libriomancy, allowing him to reach into books to create things from their pages. Gutenberg’s power brought him many enemies, and some of those enemies have waited centuries for revenge. Revenge which begins with the brutal slaughter of a wendigo in the northern Michigan town of Tamarack, a long-established werewolf territory.

Libriomancer Isaac Vainio is part of Die Zwelf Portenære, better known as the Porters, the organization founded by Gutenberg to protect the world from magical threats. Isaac is called in to investigate the killing, along with Porter psychiatrist Nidhi Shah and their dryad bodyguard and lover, Lena Greenwood. Born decades ago from the pages of a pulp fantasy novel, Lena was created to be the ultimate fantasy woman, strong and deadly, but shaped by the needs and desires of her companions. Her powers are unique, and Gutenberg’s enemies hope to use those powers for themselves. But their plan could unleash a far darker evil…

“This may be Jim Hines’ best work. Libriomancer is smart, silly, and deadly serious, all at the same time. It’s a book about loving books. This is the magic librarian and ass-kicking dryad adventure story we’ve all been waiting for.”
—Seanan McGuire, New York Times-bestselling author of Chimes at Midnight

“Libriomancer not only pulls magic from between the pages of books—from Gutenberg to Harris—but puts it there under Hines. This is a book for everyone who has ever wanted to pull Excalibur from the page.”
—Tanya Huff, bestselling author of The Silvered

“Nonstop action and laughter power Hines’s riveting second journey into the ‘peculiar life’ of Isaac Vainio…. Like a good pinball game, Isaac’s adventures are frantic, fascinating, and more than a little noisy. Hines supplies everything a reader needs – werewolves, ghosts, robot insects, a fire spider that eats candy, and homages to classic SF – for a very good time.”
—Publishers Weekly

"Hot damn, this book is pure geeky fun.... [A] love letter to science fiction and fantasy, with real emotional weight at the center of it — except this version is a rollicking adventure story full of ridiculous little touches. It's a seriously fun ride."
—io9

"An incredibly readable story that’s straightforward without being predictable, and action-packed without being rushed. The main and supporting characters alike have complex and chaotic relationships and histories, and I look forward to seeing these unfold further in the books to come."
—Wired

“Isaac Vainio is a hero for the rest of us, the library nerds and bookworms.... [Libriomancer] is ardent wish fulfillment with a hefty dose of action, romance, literary pop trivia and just a pinch of social commentary.”
—RT Book Reviews

"Whenever I open a Jim Hines novel, I expect to have a good time – humor mixed with some soul pondering, deep character development, fast action, and snappy dialogue. So I was unsurprised that Libriomancer had all of these things in spades, plus a unique use of magic and a fractured and cobbled together cosmology that makes complete sense as a whole. What I didn’t expect was to see myself in the pages. With Isaac Vainio, Hines has created a protagonist who not only knows and loves the same geek pop culture that I do, but who has a passion for books as deep as my own."
—Black Gate